Sale on canvas prints! Use code ABCXYZ at checkout for a special discount!

One of my friends who is an ex-Marine said to me, "I'm not really into art, but if you did a Camouflage painting I would buy it." So I did it, and he bought it. But now I offer it to everyone else as a one of a kind print.

This artwork is also my tribute to my grandfather who fought in the World War, to all three of my brothers who served for our country, and to all current soldiers and veterans who gave everything they had for our freedom.

This was made for a friend's Halloween theme party.

The raven at night under the purple moon.

The title of this painting was inspired by Edgar Allen Poe’s poem ‘The Raven,’ although the painting itself really has nothing to do with Poe’s story. But this was an homage to him.

Poe was like the Tim Burton of his time. He was a pioneer of Gothic and dark imagery and deserves this credit.

In this painting I experimented with dripping techniques to create the rain effect in the background.

This is a painting I did which is influenced by classic Japanese Art. I'm a huge fan of Asian art especially Katsushika Hokusai, the artist who did the famous painting, 'The Great Wave Of Kanagawa.' I tried to capture the feel of the old classic line drawings you see in a lot of Asian art, and at the same time put my own personality into it. This is the first of 3 versions. 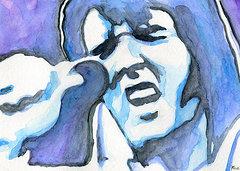 Elvis Aaron Presley (January 8, 1935 � August 16, 1977) was an American singer, musician, and actor. Regarded as one of the most significant cultural icons of the 20th century, he is often referred to as "the King of Rock and Roll", or simply, "the King".

The Fine Art America watermark/logo will not appear on your final print.

Every Breath You Take

Love can sometimes take your breath away and hit you at the primal level. This feeling is represented in this abstract painting by the primary colors of the spectrum: red, blue, yellow. These colors are blended together for a cool and calming effect.

I’m fascinated by ravens because I see them as misunderstood outcasts. These are really cool creatures but they get a bad rap simply because people are scared of the way they look. They get all kinds of underserved negative attention, myths, folklore-even being called evil which they are not.

This is my original painting done in 2008. It’s acrylic on canvas measuring 20X16. It’s two lovers at night underneath the moon and in between the clouds.

Marilyn Monroe was an American actress, model, and singer, who became a major sex symbol, starring in a number of commercially successful motion pictures during the 1950s and early 1960s. She was the quintessential blonde sex symbol and a timeless beauty.

This painting was done with a graphic Art Deco style with simple yet powerful colors.